The founder of the Jewish community in Jerusalem was the renowned Rabbi Ovadiah of Bartenura, the man who penned the seminal commentary to the Mishnah still used by everyone who studies it today. He was a Spanish Jew who went to Italy, to the town of Bartenura and then to Jerusalem. He was the rabbi there and set up the Sephardic community. The second town that the Spanish Jews came to in the Land of Israel was Safed (Tzfas), situated in the hills not far from the Sea of Galilee. It is one of the four holy cities in the Land of Israel, according Kabbalistic tradition (Jewish mysticism). The others are Jerusalem, Hebron and Tiberius.

As elsewhere, the Marranos came to Israel with the Spanish exiles. In the rabbinic literature of the times one can see over and over again the challenges that the presence of the Marranos brought with them. It was at this time that, in order to differentiate themselves from the Marranos, that the Sephardim adopted a suffix to their name, the Hebrew letters samech and tet (“S” and “T” sounds respectively), which stood for Sephardi tahor, “pure Spanish Jew.” This suffix did not only serve to differentiate them from Ashkenazic Jews but from the Marranos. It was a statement saying in effect, “In this family, there were no Marranos.”

Spanish Jews fled to many parts of the world, creating Sephardic communities in such far-flung places as Palestine, Greece, Amsterdam, the Caribbean and North and South America. To this day, descendants of those expelled Jews still speak Judeo-Spanish, or Ladino, 15th-century Spanish with traces of the local languages of the countries in which they settled.

Maimonides was born Moses ben Maimon on the eve of Passover in 1135 in Cordoba, Spain, to a prominent rabbinical family. In his family tree figured King David and Rabbi Yehudah HaNassi, who had compiled the Mishnah (as we saw in Part 39). His primary teacher was his father, Rabbi Maimon ben Joseph, a Jewish judge, who taught him not only the Talmud, but also the fundamentals of mathematics, astronomy and philosophy. And more ……

, the famed moralist who authored Duties of the Heart (a book that continues to be a highly popular text in Jewish ethical studies today), examining the obligations of one's inner life and presenting a system to assess one's true religious commitment.

, the famed author of The Kuzari, a philosophical novel based on the story of the king of Khazaria, a kingdom located between the Black Sea and Caspian Sea. (In the 8th century the king of Khazaria, undecided whether he should affiliate with the Christians or Muslims, had great scholars argue before him the merits of the world's religions, and as a result of this debate converted to Judaism as eventually did a goodly portion of his country; the history of Khazaria ended in 11th century when it was destroyed by a Byzantine/Russian coalition.) Basing himself on this reportedly true story, Judah HaLevi imaginatively recreated the debate before the king in his novel, which continues to be popular to this day.

On August 3, 1492, just three days after the deadline given to Spain’s large and vibrant Jewish community to convert to Christianity or leave the country forever, three ships - the Niña, Pinta, and Santa Maria - set sail from the port in Palos de la Frontera West. They were heading for the rich spice markets in Asia. We all know where they wound up. Much has been written about the supposed "concealed" Jewish identity of Christopher Columbus, leader of the voyage. But while the theory is plausible, it cannot be proved, and is based on rather strained circumstantial evidence.Yet one person on the voyage had unarguably been a Jew, though he converted shortly before setting out to the deep blue sea. Luis de Torres was apparently born Yosef ben HaLevi HaIvri. He was the voyage’s interpreter. Columbus hired de Torres, who spoke Portuguese, Hebrew, Arabic, and Aramaic, believing that he could converse with the Jews they would find in the court of the Chinese emperor and with the merchants in the markets of the Orient.

The Seneor family, from the 1460s, were the largest group engaged in tax farming for the Crown of Castile. The Seneor family was also involved in politics, defending the interests of artisans in the cities of central Castile. He was related to Andrés Cabrera (the steward of King Henry IV of Castile), Andrés Cabrera's wife, Beatriz de Bobadilla (lady of the Queen Isabella of Castile) and Alonso Quintanilla, Count of Accounts, to whom the Infante (crown prince) Alfonso had entrusted the establishment of a mint in Medina del Campo (a city enriched by the fairs). In 1488 Seneor became treasurer of the Holy Brotherhood (founded in 1476 and counting Quintanilla among its members). 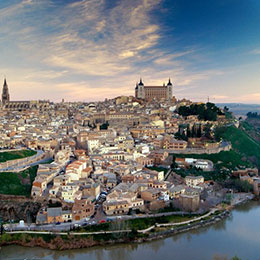 “The Jerusalem of Spain”. The size and the splendor of Jewish Toledo–the biggest Jewish community in Christian Spain–gave it this name.

Jews probably established themselves there at some time during the 4th to 6th centuries. However, Jewish presence in Toledo was inconsiderable at this time, and the first sources referring to the Jewish quarter of Toledo are from the 12th century. The community of Toledo grew to be one of the largest on the Iberian Peninsula, and at the height of its prosperity in the 12th-14th centuries the Jews probably formed up to one third of the city’s population.

A major European center of cultural, social and political activity during the 12th-13th centuries, Toledo was home to the renowned School of Translators. Their translations of Greek, Hebrew and Arabic texts into Latin made it possible for the rest of Europe to learn of cultural and scientific advances made by the Jews and Muslims, and also to rediscover the teachings of the classical Greeks. 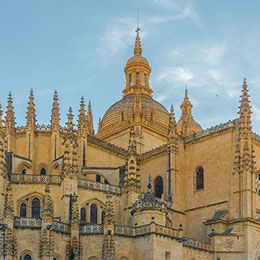 While Segovia was originally settled by the Celts, and boasts one of the richest collections of Romanesque architecture in Europe, by far its most striking monument was built by the Romans, who conquered the city in the year 80 B.C.E. Standing at the entrance to the city for 2000 years, the 166-arch aqueduct was made of blocks of stone held together by a masterful balance of forces using no mortar. It was declared a national Historical-Artistic Monument in 1884.
The presence of Jews in Segovia dates back to the 11th century. They engaged primarily in commerce, tanning and textile manufacture, and the community was prosperous. Between the 13th and 15th centuries Segovia was also the birthplace or residence of many Jewish scholars. Ironically, two of Segovia’s most prominent Jews held such important positions in the 15th century that it may be said that they influenced not only Spanish history, but the history of the world as well. Abraham Senior, advisor to the Queen, was instrumental in arranging the marriage between young Isabella of Castile and Ferdinand of Aragon, which resulted in the unification of the two kingdoms. The other prominent Jew, Itshak Abarvanel, held a position equivalent to that of minister of the treasury and economic advisor to the kingdom.
It was in the Alcazar of Segovia that Isabella and Ferdinand first met, and it was also there that Christopher Columbus (himself said to be descended from conversos) visited the queen to beg her for support for his ventures.