Jewish Heritage Alliance announced the first of its kind "mobile Capsule Exhibit detailing the Saga of Sefarad (Jews of the Iberian Peninsula)." The exhibit was announced at a presentation that took place on November 12, 2019 at Bet Hatfutsot - Museum of the Jewish People in Tel Aviv, with the formal launch to follow in Porto, Portugal in early 2020 (March) and will be available worldwide later on.

At the Crossroads of Sefarad, In the Footsteps of the Crypto Jews

Is a mobile exhibit created in partnership of the Museum of the Jewish People at Beit Hatfutsot, a well-respected global institution focused on telling the ongoing story of the Jewish people, and Jewish Heritage Alliance, a global platform, representing alliance members worldwide, with a mission to research and deliver the story of Sefarad to the world at large.

The people behind the project

The initiative is the brainchild of Michael Steinberger, founder and CEO of Jewish Heritage Alliance, and Itamar Kremer, who is the educational director at Beit Hatfutsot. The design and development of the exhibit was conceived by Dr. Orit Shaham Gover, the chief curator of Beit Hatfutsot and her devoted team: Dr. Dvir Zur and Dr. Meirav Balas.

The project is supported by JHA strategic partners, key among them is ATP (Porto and Northern Tourism Association), represented by Mr. Rui P. Gonçalves with aid and assistance of Mrs Ruth Calvão, board member of JHA and founding member of Centro de Estudos Judaicos de Trás -os- Montes (Center for Jewish Studies in Trás-os-Montes). The exhibition is endorsed by the president of the Portuguese Republic; the Portuguese Parliament, and the Spanish Jewish Network, as well as other public and private NGOs and institutions worldwide.

Giving Voice to the Saga of Sefarad

Michael Steinberger, CEO and Founder of Jewish Heritage Alliance says that the story of Sefarad lacks the global attention it deserves and is somewhat obscure in the annals of world history. JHA mission is giving voice to the epic narrative of Sefarad (Jews of the Iberian Peninsula). "The mobility of the Capsule (mobile) Exhibit offers a unique opportunity to engage the world with the saga of Sefarad by distributing and sharing the story around the globe," Steinberger said in a statement."

Itamar Kremer, Educational Director for Beit Hatfutsot explained that the "The exhibit is presented on panels that will be available via PDF files (portable document format) allowing delivery of the exhibit electronically across the globe." The exhibit details the narrative of Sefarad in a concise presentation of this era, including the achievements and failures the period produced.

Jewish Heritage Alliance (JHA) unites people and organizations from across the political and social spectrum with an interest or connection to the Saga of Sefarad, past and present, in order to promote and deliver this segment of history, its effects and consequences, to the public domain and the world at large. Jewish Heritage Alliance embraces this compelling story in all its complexities. From the achievements of the "Golden Age", a time when Jews were able prosper and coexist peacefully with their neighbors of the Iberian Peninsula, through the pogroms and Inquisitions where hundreds of thousands of observant Jews were massacred and or forced to convert to Christianity (Conversos; Marranos; Crypto Jews) or be killed, ending with the expulsions of 1492 and beyond. JHA follows in the footsteps of these Jews and Conversos, depicting their travails, illustrating how these brave, tenacious people survived, flourished, and created the new world.

In an effort of bringing these stories to life, JHA created a portal combining a dynamic display of historical and cultural information, including carefully designed meetings, events and tours embodying these events. 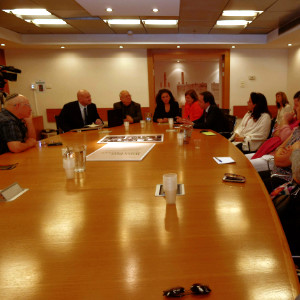 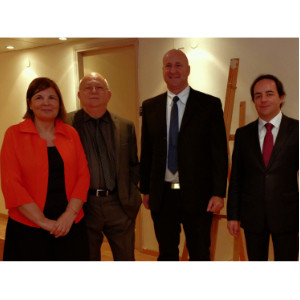 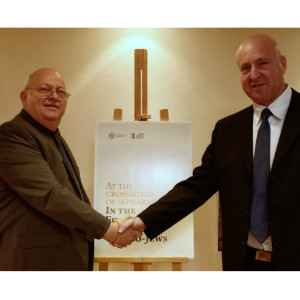 Michael Steinberger welcomes participants to the “At the Crossroads of Sefarad… In the Footsteps of the Crypto Jews” Capsule Exhibit Presentation at Beit Hatfutsot, Tel Aviv, Nov 12, 2019.

Michael Steinberger explains the Genesis and purposes of the mobile exhibit “At the Crossroads of Sefarad… In the Footsteps of the Crypto Jews” during the Exhibit Presentation at Beit Hatfutsot, Tel Aviv, Nov 12, 2019.

Michael Steinberger speaks about the importance of the exhibit “At the Crossroads of Sefarad… In the Footsteps of the Crypto Jews” as relating to present day Converso phenomenon at the Exhibit Presentation at Beit Hatfutsot, Tel Aviv, Nov 12, 2019.

Rui Pedro Goncalves, Executive Director Associação de Turismo do Porto (ATP), shares his enthusiasm and commitment to promoting Jewish heritage and the exhibit “At the Crossroads of Sefarad… In the Footsteps of the Crypto Jews” during the presentation at Beit Hatfutsot, Tel Aviv, Nov 12, 2019.

Itamar Kramer, Educational Director at Beit Hatfutsot worked closely with Michael Steinberger in developing the Capsule Exhibit, speaks to the importance of this project during the presentation of Nov 12, 2019 at Beit Hatfutsot in Tel Aviv, Israel.

Ruth Calvão, Member of JHA Board and founding member of Centro de Estudos Judaicos de Trás -os- Montes (Center for Jewish Studies in Trás-os-Montes, Iberian Historical and Cultural Routes), discussing the pride of the Bnei Anusim (Conversos) of their heritage and their significance in the saga of Sefarad.

Revital Blumenfeld, Director of Communications at Beit Hatfutsot, speaks to the objectives and relevance of the mobile exhibit in telling the rich and profound story of the Bnei Anusim. Their tenacity in maintaining their Jewish identity in hiding and the journey back to Judaism in some cases.

Dr. Joel (Yoel) Rappel, professor at Bar Ilan University in Tel Aviv, also director of the Eli Wiesel Archive at Boston University, affirms the significance of the exhibit during the presentation of Nov 12, 2019.