“You have demonstrated that the spirit of Judaism can transcend centuries of hardships and secrecy...and that the call of the Torah is eternally powerful and compassionate.”

Perspective: Brazil is the largest country in South America, commanding four fifths (4/5) of the continent, larger than continental USA, with a population of approximately 208 million people. It’s a true “melting pot” with people of all colors and multi ethnic backgrounds. Religion in Brazil was formed by the confluence of the Catholic Church, atavistic traditions of enslaved Africans, and the advent of the Portuguese colonization of Brazil in the 1500s. There are a variety of religious denominations with Roman Catholicism being the predominant faith, boasting the world's largest Catholic population. Adding to the mix, is a small component of approximately 100,000 to 120,000 Jews, most of whom identify themselves as secular and Zionist. One of the best kept secrets about Brazil’s Jews is that they were the early settlers, having arrived over 500 years ago. The famous explorer Gaspar da Gama, a Converso, accompanied by Portuguese admiral Pedro Alvares Cabral, was the first European to step foot in Brazil.

Rabbi Gilberto (Emanuel) Ventura was born in Sao Paulo, the largest city in Brazil. He was brought up in a Jewish home, influenced by the previous generations. He gravitated towards Yiddishkeit with a penchant for Jewish studies, eventually leading to his ordination as a Rabbi. Along the way Rabbi Ventura learned of the historical Jewish connection to the origins of Brazil, a fact that was, and is, overlooked by most Brazilians to the present day. A proud Jew, but also a proud Brazilian, now armed with this compelling information, Rabbi Ventura set out on a mission to disseminate this impactful discovery with the hope of creating a positive influence in the Jewish communities, as well as the public at large. His aspiration was that this newfound reality would also act to combat anti-Semitism wherever it may reside. He started his quest with humble beginnings; first as a teacher in Jewish schools; the Jewish club and the synagogue where he worked.

And then the really big surprise! Rabbi Ventura was introduced to the fact that millions of Brazilians are descendants of Conversos (in Hebrew Bnei Anusim), descendants of the Jews forced to convert to Christianity during the inquisitions that took place on the Iberian Peninsula (today Spain and Portugal). Moreover, many of these Conversos were aware of their Jewish heritage, and many had been engaged in Jewish ceremonial practices in hiding. These descendants of the forced conversions had been left to fend for themselves for over 500 years with little or no guidance; often in opposition, or even contempt of many Jewish officials. Taking this amazing knowledge to the next level, Rabbi Ventura, together with his wife and children began visiting communities in the state of Rio Grande do Norte, situated along northeast Brazil. 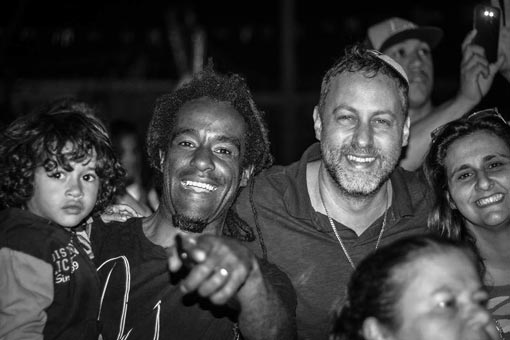 Helping the Converso or Bnei Anusim now became Rabbi Ventura’ calling. Mesmerized by this inexplicable phenomenon wherein the concept of the (awakening) Jewish Spark (the “Pintele Yid) planted deep in the heart and soul of every Jew, now manifested itself and became a reality right before his eyes! What started as an ambitious vision, slowly but steadily became a reality. Helped by the advent of social media and its networking capacities, Rabbi Ventura’ efforts and excellent work catapulted to reach amazing successes.

Accepted by the overwhelming majority of Brazil’s Bnei Anusim, Rabbi Ventura heads 15 communities. To enhance and bolster these communities, Rabbi Ventura makes dozens of trips across the vast land of Brazil to the locales of these Jewish outpost, where he and his wife volunteer their time to teach Torah, Hebrew, Jewish practices, values, Jewish history and Zionism. On occasion, his visits are accompanied by leading rabbinical authorities from Israel and elsewhere. He bolsters confidence and pride with public celebrations of Jewish holidays and festivals, including a Purim parade in the old Jewish Street in Recife Antigo, in front of the location of Kahal Zur Israel Synagogue, the first synagogue built in the Americas.

We salute you Rabbi Ventura for your hard work, commitment and zeal in practicing the prayer of Hashivenu or in the English “Turn us back O LORD to You and we will return to You, renew our days as before”. 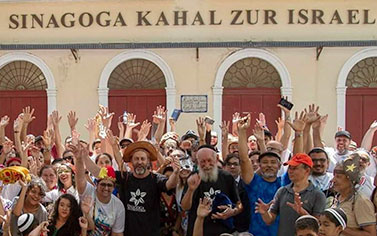 The Conversos Comeback is a phenomenon coming to the fore, generating unprecedented interest, curiosity, excitement, quandary and controversy. 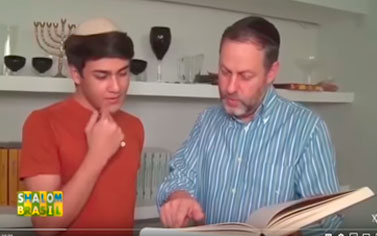 Brazil TV interview discussing the amazing story on Brazil’s Bnei Anusim youth and the wonderful work Rabbi Ventura and Sinagoga sem Fronteiras is providing these descendants of the forced conversions of Sefarad. What an uplifting story it is. 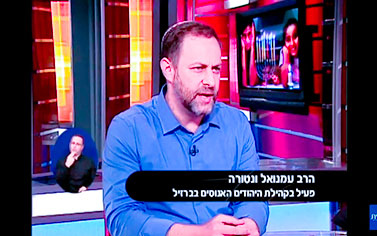 Invited to speak on Israeli television, Rabbi Ventura, of the Synagogue Without Borders, tells the Israeli audience about the Bnei Anusim (Conversos) movement in Brazil and related.